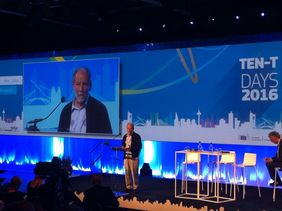 It is both a pleasure and an honour for me to speak here in front of you at the 2016 TEN-T Days!

We are now in the Netherlands - which means, if you translate it, the “Low Lands”

And it is true that this country does not have a lot of high mountains the highest one is 322 m high, but it seems that this mountain is not the one that the Dutch care about the most: when looking at the news from the last weeks and the programme of these TEN T days

I suddenly notice that the most important Dutch mountain now seems to be located in Switzerland: the Saint Gotthard

I think that it is because the new Gotthard base tunnel:

A powerful symbol of how far European integration has come and shows how much we nowadays depend on what happens elsewhere in Europe.

And Rotterdam is one of the best places in the EU to illustrate this:

It has Europe’s largest port and is one of the starting points of the busiest corridor in the EU - between Rotterdam and Genova.

So, what does this tell us for transport infrastructure policy and the TEN-T?

To start, I have to admit that I am amazed that a non-EU country is driving the EU debate and leads the way in many respects. I can’t hide that I am a real fan of their transport policy and I think that the EU has already learnt a lot from it - and can still learn more!

But without proper connections, the benefits of the tunnel cannot materialise.

In Germany, the upgrading of the connecting is expected to be finished only in 2041!

For Italy, I do not now the finalisation date yet. But at the moment, Switzerland is paying for the upgrading of the Italian railway lines!

What lessons should we learn?

First, we have to conceive and plan transport infrastructure as a network, based on real transport needs, not as a list of isolated projects for instance, I think that Member States should be required to have a real portfolio of bigger and smaller projects that can complement one another.

And we should not start several large projects at the same time, because it often means that none of them will be realised in the foreseeable future

We can plan a lot, but let us first build one major project and start the second when the first is finished.

And I think that the current EU legislation - the Regulations on the TEN-T and the CEF are an important step in this direction, but too many gaps remain along the borders, even 25 years after the fall of the Iron Curtain.

This patchwork does not connect Europe, it divides us!

Secondly, Switzerland has a very clever approach: As fast as necessary, not as fast as possible because isolated stretches of high-speed lines do not really bring us forward, if they are not integrated into a vision - and an upgrading strategy - for the whole network, when building the High-Speed Line Bern - St Pölten, the Swiss justified this investment with the improvements of 70 connections across the country most countries in Europe do not think this way, let alone act like this!

The TEN-T approach is the right one: Integrate freight and passenger flows, define minimum standards, and set clear deadlines for the realisation.

Thirdly, funding has to be reliable and planned for the mid- to long-term the Connecting Europe Facility is an important step forward in this direction the Gotthard Tunnel is mainly financed through infrastructure charges for road and rail, and the road charges are three times higher than the maximum allowed in the EU, apply to all roads and all trucks above 3.5 tonnes.

And I am sorry to say that: In the EU, we always speak about modal shift, but it remains a plan that was written a long time ago, but has not been realised till now.

Let us keep this in mind, Commissioner Bulc, for the work on the upcoming Road Package!

So, is the EU on track for connected and sustainable mobility?

Our Committee is convinced that there are many encouraging signs:

The demand for EU funds is very high, across the EU - and exceeds the available funds Awareness is increasing significantly: this event is the proof - look at how many people are here today!

The Core Network Corridors work very hard to make their corridors a reality and we have started to think horizontally. The meetings on the “Rail Freight Corridors” or the “Passengers Rail Summit” during the TEN-T Days are good examples.

So, is everything brilliant on the Transeuropean Transport Networks?

Not really, according to the discussions in our committee:

many of my colleagues are frustrated that 2.6 billion euros were taken out of the CEF to finance the Juncker Fund (officially called the “EFSI”) and that transport is not amongst the sectors that really benefit from the EFSI and, even worse, as my colleague Markus Pieper put it in our discussion with Commissioner Bulc:

The money is mainly used for national motorway projects, whereas the TEN-T Corridors and more sustainable modes of transport fall behind.

Moreover, many of our Members are concerned that the commitments made by Member States will not be respected and that there will be delays and that the gaps at the borders will not be closed and also that Transport is almost nowhere to be found in the Commission Work Programmes although it is the only sector where CO2 emissions have increased since 1990.

What do we need to fix this?

I think that the Regulations already contain many responses:

The “use-it-or-lose-it”-principle is enshrined in the texts and should be applied. The Corridor approach should be followed with consistently: The EU should not finance single projects, if their integration into the corridor is not taken care of at the same time.

And then there is one aspect that is gaining momentum and that is essential in my eyes:

Smaller projects may be less visible, but they can have great impact.

This is also what companies keep telling us!

Especially the closing of small missing links at the borders, this year’s European Capital of Culture, the Polish city of Wroclaw, cannot be reached by train from the West, although only 100 million euros are needed to close the electrification gap and cut travel time by 2 hours. If we want to make a difference in the daily mobility of Europeans, these things must not be forgotten:

Yes, long-distance traffic is important, but 95% of all rail passengers travel outside the high-speed network and if we can make a difference there - namely in border regions - we can have a huge impact every day! And bring Europe together.

It is great to see that the Commission and the Committee of the Regions are taking up this idea:

DG MOVE has recently conducted a very interesting study of cases and general lessons for cross-border sections,and I would like to thank Commissioner Bulc, Mr Onidi and his successor Mr Ruijters, as well as his whole team, for this and let me also underline that regions across the EU are becoming involved and we have a very close cooperation on this with the European regions, represented in the Committee of the Regions.

I thank Mr Markkula and Mr Cattaneo for their support and the European Investment Bank has also joined the debate and shown real interest!

So, to conclude, let me sum up the three messages of the Transport Committee in the European Parliament:

Who would have thought, 100 years ago, that one day the rest of the continent would be following so closely the development of a tunnel in the Alps?

Secondly: do not take away the EU funds dedicated to the TEN-T  in order to invest them in completely different sectors or in transport projects that do not follow the TEN-T logic, the EU has committed to fighting against climate change!

We have worked too hard on the TEN-T to cut them down now!

Thirdly: small projects can have big effects ask your companies: targeted investments are often what is really needed and ask your citizens in border regions: they expect the EU to act not only on large-scale projects, but to improve their daily mobility in local and regional cross-border transport.

So to conclude: Let us use the TEN-T as our map to climb the mountain of smart and sustainable mobility.